Please submit any questions you might have and we'll answer within 24 hrs or less (except on Sundays :) Ask a Question

I also want to offer you our free report How I Feed My Family of Ten on $100 a week. Click here for the details!

A pot roast is a roast that is cooked covered, in the oven with water or mushroom soup (moisture) etc. until nice and tender.

An oven roast is a roast that is cooked in the oven until it reaches the desired internal temperature (rare to medium-140-160 degrees F. It is then immediately pulled and sliced thin and served with gravy made form the drippings.

Eye of Round Roast

The eye of round is a dandy little roast cut from the full cut round. It is lean and makes a great oven roast if not overcooked. Because of its solid structure it is great for slicing thin for French dip sandwiches. Cook medium rare to medium for best results. Also makes eye of round steaks which are good for Swissing. Can also be cut into strips for stir fry or cubes for lean stew meat.

The true rump roast is the chunk that is cut off the end of the round (hindquarter) to square it up before cutting full cut round steaks. The rump is three cuts in one and is sometimes left whole but usually divided into three separate roasts. There is the bottom-round portion, the top-round portion (watermelon cut, and the eye of round or the three-in-one portion (it has a little bit of all three cuts). Any one of these roasts will make an excellent oven roast. Quite often Bottom round roasts are sold as rump roasts. Also makes outstanding stew meat or ground round.

The top round roast is separated from the full cut round and is a nice solid piece of meat that makes a very nice oven roast. Also the top round is used to make London broils which are great on the grill if not overcooked. Top round steaks can be cut from the top round as well as stir fry strips, nice lean stew and outstanding ground round.

Usually the bottom-round roast is marked as a rump roast in the meat case. The bottom round is a section of the round separated from the top round and the eye of round by thin layers of fatty membrane which we call seams. The bottom round makes a decent to very good oven roast depending on ones ability. It can be quite dry if overcooked. It also can be cooked as a pot roast with good results or cut into steaks for Swissing. Also makes outstanding stew meat or ground round.

Sirloin Tip or Round Tip Roast

The sirloin or round tip roast is a very nice oven roast and makes fair to "middlin" grilling steaks for the experienced griller. Like many oven roasts if it is overcooked it will be dry and tough. Pull from the oven when it reaches the medium rare internal temperature of 145-150F and it will be very nice.*Ask the butcher for the solid side you'll be glad you did.

The prime rib, standing rib or just plain rib roast is an outstanding, oven roast. Actually in the right hands a prime rib is better than an outstanding roast, it is the best roast. Of course the prime rib also makes some of the best steaks money can buy as well, namely rib eyes and bone in rib steaks. The prime rib is one of the more forgiving oven roast because of the nice fat cover and internal marbling but overcooking can still suck the life out of it.

The top sirloin is from the top of the loin in between the T-bone steak portion of the loin and the full cut round section of the hindquarter. Top sirloin makes very nice grilling steaks and will also make a very nice oven roast. Watch that you do not overcook this very nice lean and finely textured hunk of meat. Thick cut top sirloins are often called Chateaubriand in many supermarkets and can be grilled like a London broil with outstanding results.

The seven bone chuck roast is an outstanding pot roast. There is nothing like a nice big bone-in chuck roast complete with carrots and potatoes in a large roasting pan with enough water to make a nice big pot of gravy. The seven bone is the leaner section of the chuck. It also makes nice steaks for Swissing or great grilled if you do not mind a little bit of chewing. Great flavor.

The cross rib roast is an outstanding pot roast and can be cooked as an oven roast with very good results as well. The cross rib is the nice lean and meaty portion of what was once called the arm or round bone roast. The cross rib is cut from the chuck and incorporates part of the ribs which are removed from the final boneless product that you will find in most supermarket meat cases.

Arm or Round Bone Roast

The arm or round bone roast is an endangered, if not extinct, cut of beef. Most of our mothers or perhaps grandmothers know what a round bone or arm roast is and I'm sure they miss them as much as I do. They were outstanding pot roasts, but because of modern day merchandising schemes has become obsolete except in some of the old fashion type butcher shops that still handle carcass beef. The cross rib roast is the same thing without the bone and are pretty darn good but just not quite the same thing.

The heel of round is an ok oven roast or pot roast. It is very lean and makes very good lean stew meat or ground round. You don't see heel of rounds in the modern meat cases anymore because the rounds come to the meat markets already trimmed up with the heels removed.

The top blade or flatiron roast is cut off the side of the cross rib. It is a very flavorful cut of beef and has very good marbling which helps it to maintain a high level of juiciness. The flatiron makes a great pot roast or oven roast. When sliced thin and fried quickly mill make outstanding steak sandwiches. Will also make great stew meat.


Source: John Smith, author of Confessions of a Butcher-Eat Steak on a Hamburger Budget and Save$$$. Available from Ark Essentials.com

Welcome to our new and improved site! Please be patient during this transition. 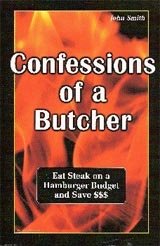 Buy Confessions of a Butcher! 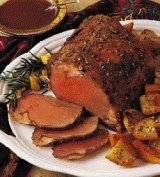